The joys of not talking 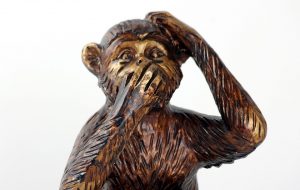 I was not aware that a gum graft might require not talking. For a week.

For a full week, I didn’t talk at work* or at home. I attended meetings, but could only communicate by writing my comments down and having a co-worker read them. I visited friends and enjoyed their company, but couldn’t say anything. Why?

The location of the graft is such that when everything was swollen, I couldn’t talk without it a) causing pain, and b) pulling the stitches and causing bleeding. In my attempts to not talk, but to communicate, I thought facial expressions would work. Not so much. Certain contortions of my lower lip and jaw pulled on the stitches which caused more pain, and because it happened so fast, I couldn’t deduce exactly what expression or movement was the culprit. All of which meant trying to not talk AND keep a straight face when interacting with people. Not an easy thing! If anything, it convinced me that I really do need to work on my poker face.

The funny thing was the people who tried to talk with me, and then felt like they couldn’t speak either. Or the people who understood that I couldn’t talk but still asked me questions that involved more detailed answers than “Yes or No.” Although I did appreciate their attempts, since it made me feel like less of a social pariah.

Thankfully, the swelling has decreased, and I can talk again, although I still have some trouble with labial consonants** (so no F’s, V’s, B’s, or P’s). It was a relief to be able to talk, and at the same time, kind of a disappointment. I started to like and appreciate not being able to talk because there is a joy in silence. A number of them, actually.

So here they are: The Joys of Not Talking.

I am glad to be able to talk again (really!), but I am also glad that I had the experience of not being able to talk. Very educational.

*I had to make and wear a sticker that said, “Sorry, I can’t talk. Doctor’s orders.” because people seemed to think I was avoiding them or being rude by not returning their “Good morning!” greetings.

**One of my favorite classes in college was linguistics, and I could have sworn these sounds were “fricatives,” but alas, they are indeed labial consonants. But “fricative” just sounds better. Go ahead and say it. “Fricative.”

***Well, except for one supervisor. The good news was that normally the drop-by would have lasted 45 minutes, and not the 5 that this one did.