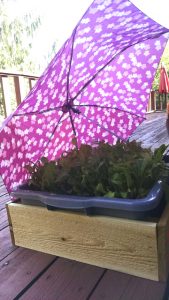 Everybody needs a little shade sometimes

This is what happens when a heat wave hits and you want your lettuce to survive. You do everything in your power* to shade that plant. Everything, that is, that doesn’t require moving the container inside (too heavy and wet). Or moving it to a shadier spot. Or putting out any effort at all.**

*This should be said in the movie trailer guy’s voice: deep, resonant, and overly dramatic.

**To be fair, I had to find the umbrella. And that umbrella was one I bought in Tokyo a number of years ago (it has cherry blossoms!). So actually, if one were to include the time and effort it took to bring that umbrella back to the States, store it, then find it for this purpose, well . . .

***As for the title of this post, my husband saw what I had done and asked, “What, are they Parisian lettuce? They need a parasol?” 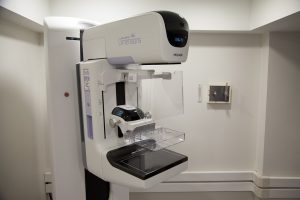 After a few years of my doctor saying, “You know, you should probably get a mammogram, just to have a baseline,” now was apparently the time to have one*. So two days after going in for my annual exam, there I was in a spa-like changing room getting ready for my first mammogram.

I’d heard horror stories (just the description of squishing did not sound like the Most Fun Ever), so I expected the worst: a drawn-out embarrassing process** that would involve discomfort, pain, and another Awful Medical Experience***.

It was so very far from that. The technician was upbeat and pleasant, and more to the point ON TIME****., so not drawn out. No embarrassment, even with a little cotton gown-vest (I appreciate concerns about modesty, but by the point you have someone handling your body parts and positioning them ‘just so,’ embarrassment no longer exists). And no pain! Sure, it’s not the most comfortable of procedures*****, but it’s over quickly. Hurrah!

My only moment of “Arrrooo?”****** was seeing two aerosol cans of deodorant in the changing room. I hadn’t seen aerosol deodorant in a long time, and yet there they were. It took a few moments to realize, “Oh, that would be the most sanitary way to provide deodorant” since you’re not supposed to wear any for the scan. It also had me wonder if mammography in its own strange way is keeping one aspect of the deodorant industry afloat.

tldr: I got my first mammogram, and it didn’t kill me.

*Funny, the same thing happened with the gum graft. Not sure what to make of this.

**I wasn’t sure it could top either of my EKGs, but hey, anything is possible.

****I’m still unclear on why medical appointments (even at the earliest, first thing in the morning time slots) seem to still require the doctor to take twenty-plus minutes after the scheduled appointment time to show up. Is this just a standard modus operandi? Do they set physician’s clocks behind by twenty minutes? Or are the docs just trying to be kind, figuring that they don’t want to interrupt you while you’re reading that fabulous article from last month’s People magazine about Pippa Middleton’s wedding?

*****Take any solid object and try to squish it flat, then hold it there at 20 psi for 30 seconds. Good times!

******Picture a dog looking at something that looks familiar, but just knows that something is not right: head cocked to the side, ears at attention. Yeah, that was me.

Summer reading program is on 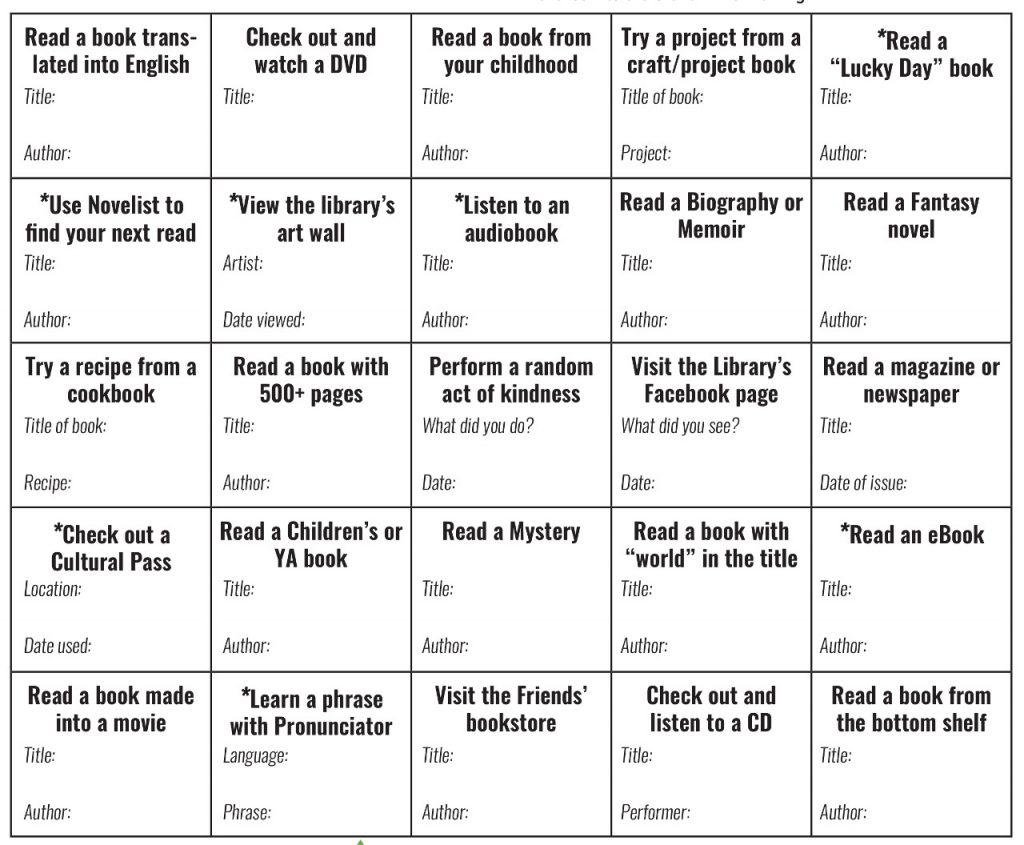 It’s summer*, which means it is time for the Summer Reading Program! My love of the SRP dates back almost 40 years** when my local public library had a Reading Bingo Card*** and I was so excited to read books that fit the different categories. I can’t remember exactly what I read, but there are proud X marks on some of the categories.

Well, in my current mild-mannered day job, I get to put together the summer Reading Bingo Card for adults, and every summer I still get excited about reading the books to complete the card. However, this summer I did something slightly different—the card is not just about reading, but also about exploring library services and “Building a Better World”****.

So of course I started strategizing and creating reading lists for the 14 different book categories, and of course I looked at how many squares I could finish ON THE FIRST DAY. Because I just could not wait.

So what’s on your summer reading list? Anything you can’t wait to try?

***Yes, I still have the 1980 Reading Bingo Card from my childhood library. And no, I am not ashamed.

****That’s the SRP theme this year. FWIW, the theme was decided two years ago.

Happy release day! OUT OF TIME is now available! 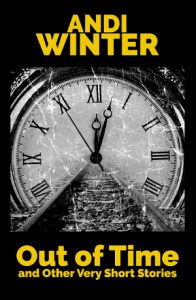 Oh, this has been sooooo long in the making, and I’m so excited! “Out of Time and Other Very Short Stories” is now available.

This is a collection of very short stories (500-1000 words each) that range from talking dogs and zombies, to stranded time travelers and surfers—all coming from some part of my personal experience.* I like to think of this as a Smorgasbord of Tales**, a wide-ranging sampler of stories to try.

Speaking of stories to try, I posted two stories from the collection. Take a look!

And now, back to our regularly scheduled writing . . .

*Well maybe not the zombies.

**Perhaps “Sushi Bar of Stories”? There is definitely a much higher Japanese content than Scandinavian in the book.

***Fun, and maddening and joyful. It’s hard to describe, but let’s leave it at “fun”. 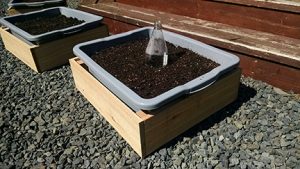 Today’s chapter: In which our heroine learns how to use a chop saw and a nail gun.

I picked up a 3-pack of dish tubs from Costco and turned them into planters for seedlings*. While the industrial look of the tubs might work well for, oh, an industrial setting, they didn’t seem to look right on a wooden deck.

My husband said, “Why don’t you build some cedar boxes for them?”

This I interpreted as: “How about I build you some cedar boxes, honey?”

What he meant was: “Why don’t you build some cedar boxes for them?”

This difference in interpretation became evident when he asked me how I was planning to build the boxes.

Him: “So, how were you planning to build the boxes?”

Him: “The cedar boxes. The ones to hold the planters.”

Him: “You didn’t expect me to build the boxes, did you?”

Him: “[heavy sigh] Alright. How about I show you how to do it, and then you can do it?”

Now, while I like to think of myself as Capable of Anything, for some reason, power tools scare me. Spiders, snakes, and creepy sounds in the middle of the night make me uncomfortable; they don’t scare me, but I don’t particularly care for them. Power tools make me very fearful. I think it has to do with the fact that they can hurt you AND YET you just might need to use them.

I have no need to handle spiders or snakes, and I don’t need creepy sounds in the middle of the night. However, I needed to cover up the grey plastic tubs.

So with a trepid hand, I learned to wield the Mighty Saw Blade of Death**. Then after a side tour with wood glue, I learned how to wield the Dastardly Nailer of Doom***. And with the help of a set of clamps and another set of hands to hold the frame steady, I was able to get the cedar box together.

By the time I finished the third box****, I was slapping on the wood glue, clamping the pieces together, KACHUNK KACHUNK KACHUNK with the nail gun, and boom—box done. No hesitation, no fretting. Just following the procedure step by step, getting shit done.

I think I’m finally starting to understand the allure of construction projects. And of power tools.*****

*Lettuce, basil, nasturtiums, and green onions, in case you were wondering. And that bottle in the middle? That is an experiment in self-watering. Time will tell.

** Pro tip: get the blade fully spinning before trying to cut anything, and keep it spinning as you pull the blade out of the cut.

*** Pro tip: angle the nailer so the nails come out parallel with the wood grain, which will make it harder to see those unsightly nails in the finished product.

****I’ve got to be honest: I made the cuts for the corner support pieces and a couple of the cedar sides, but my husband did the majority of the cutting. In the time it took me to make three cuts, he had finished cutting eight pieces and had time for a nap.

*****Now I just have to get more comfortable with the chop saw. I can use it, but it still freaks me out.