Recently I started watching new-to-me movies (having seen all the Marvel movies, some of them multiple times*), and, having been not entirely interested in many** movie releases of the past few years, thought I might try some Academy Award winning/nominated films. Because, hey. They should be good movies.

A few were outstanding, and a few were the disappointments.*** That said, I’m glad I saw them, and don’t feel like I wasted my time.

So with no further ado, here are my Haiku Movie Reviews****.

stunning visuals
but shocking lack of context
so disappointed^

it was intense, yes
fine acting, Falcon, Hawkeye
but lacked a story^^

Gary Oldman, wow
two hours about a choice
totally worth it^^^^

Dame Judi Dench rules,
gets friendly with a Muslim—
tender and heartfelt^^^^^

What films have you seen lately that impressed you? Which films are you looking forward to seeing? I’m looking for recommendations, so post your thoughts in the comments.

*Captain America and Doctor Strange, I’m talking to you.

**Is it any wonder that TV, in its many-varied splendor, is doing so well?

***I don’t think they were all accolade-worthy. Perhaps the Oscars™ are not the best baseline for quality.

****I initially wrote them as “One-Sentence Reviews,” but some of the sentences became so long and unwieldy that I thought haiku might be a more suitable form.

*****It was a spectacle, but not much else. Can someone explain to me, in this dystopian world, where they get all the fuel for their vehicles? And what is with the flamethrower guitarist?

^Christopher Nolan’s cinematographer does nice work, but not enough to save this flimsy docudrama about the truly gripping rescue of the British and French WWII soldiers facing imminent annihilation by the Nazis. Shame on Nolan for providing no context for just how desperate and stunning this rescue was (just three—3!—sentences at the beginning of the movie, with NO mention of the sacrifice of British soldiers at Calais as a means of drawing off the Nazis, was pathetic), and shame on him for the odd time-structuring of the movie. And shame on Hans Zimmer for providing a soundtrack consisting almost entirely of pounding heartbeats (and minimal music). And again, Tom Hardy couldn’t save this film.

^^Glad I saw it, but damn. Another job I do. not. want. Bigelow can do action, though. And those Marvel actors? They really can act. Huh.

^^^Apparently my knowledge of recent history is sorely lacking. And to learn that Bin Laden was captured while they were filming the movie? Wow.

^^^^Phenomenal. Intelligent, nuanced. Has me itching to read more about Churchill.

^^^^^And now I have to see Mrs. Brown. And wash my handkerchief from crying at the end.

^*Just to see if you’re paying attention. I’d only seen bits of the movie when it was broadcast on TV, so it was interesting to see it in one complete showing. I <3 Tackleberry.

A little late in posting, but thought you might enjoy this taste of the crazy (for the Portland area) snow earlier this week. 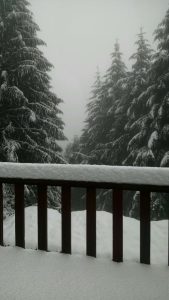 the 2nd round of 4″ of snow on the back deck

We still have some snow on the ground, but just the barest hint.

I’ve been feeling twitchy lately—that angsty-I-can’t-sit-still feeling. Just when I start to tackle my To-Do list, darn if I don’t have to get a tea refill, or find the answer to an incredibly important question (“What is the difference between ‘copy that’ and ‘roger’?”*), or check email.

Hours later, I’m kicking myself because I didn’t get to the real things I needed, or worse wanted, to do.

You’d think it would be easy enough to just call a do-over and start again.

The guilt. The shame. The additional distractions.

So I tried something new, thanks to Tim Ferriss**:

So I did this exercise, figuring ‘what the heck’, and lo and behold! I realized I needed to change my focus, and dove into the task, and ZOMG I made progress. Legitimate progress. And it felt really good. Like, really supercalifragilistically good.

So if you’re anything like me***, give this a shot and see what you think.

with a yogi's self-denial
they've bloomed...
camellias at my gate
-Kobayashi Issa