Out of numerous entries, my (very) short story, “Bitter Spell,” was chosen to be read on the upcoming Halloween episode of the Alone in a Room with Invisible People podcast.

Curious what this may look (er, sound) like? Check out last year’s Halloween episode. (Skip over the first 30 seconds to avoid the creepy intro.)

I’m excited to hear my work read outloud by a voice not my own, let alone possibly by Holly Lisle, whose classes I have taken. Validation FTW!

Have a Happy Halloween, and may your zombie ex-husbands not come after you. 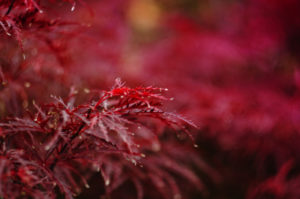 blazing color in the rain

Fall is here, and that means it’s time to get back into baking bread. I was looking at making a rye bread, but discovered that my favorite rye bread recipe (which I hadn’t made since last winter) would take a very long day.*

I didn’t have the time for that.

Instead, I found a stray ‘try me’ recipe I’ve had for awhile and decided to give it a shot: Rye Soda Bread.

What I got was a fairly light loaf with lovely chewiness. And it took all of an hour**.

Preheat oven to 375 degrees fahrenheit. Mix both flours, the oats, baking soda, and salt in a large bowl. In a separate bowl, whisk the egg and buttermilk (or yogurt or sour cream mixture) together, then use a fork to stir the egg mixture into the flour. Once it starts to come together, use your lightly floured clean hands to pat and bring the dough together.

Shape the dough into a round ball and place on a lightly floured baking sheet, dusting the top lightly with flour too. (I patted it into a loaf and placed it in a greased loaf pan.) Use your hands to flatten the dough into a disk, about 1/4 inch deep, then bake in the center of the oven for 40-45 minutes, or until a firm crust has formed and it sounds hollow when tapped on the bottom (I use a thermopen and look for 190+ degrees and a clean probe.)

Transfer to a wire cooling rack, and serve slightly warm.

Upon writing out the recipe with my modifications, I realized that perhaps I didn’t follow the recipe exactly. Whoops. Well, give it a go and let me know what you think in the comments.

*Multiple proofs, and that is after having to boil a molasses mixture and then drop its temperature gently, which takes forever.

**Well, after the oven pre-heat.

***Unfortunately, I didn’t note where I found the recipe. I really need to write that down when I photocopy recipes from library books.

****Okay, so it wasn’t precisely 5/8 cup, but as close as I could eyeball it with the Pyrex measuring cup.