The eclipse is coming! And now I get it 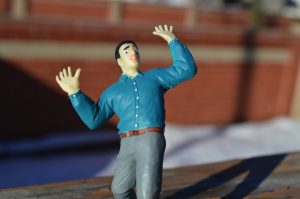 Oh, no! The eclipse (and a whole lot of crazy) is coming!

There has been a crazy amount of hype* around the upcoming total solar eclipse, with daily updates of estimated visitors to Oregon (now at 1 million!), announcements of National Guard readiness, tales of preparation at local hospital emergency rooms, in addition to the reminders to essentially prepare for the Zombipocalypse: have a full tank in your vehicle, take lots of water and food, have an emergency kit and a communication plan for your family, be prepared for no cell phone service, and have a stash of weapons readily available**.

I will admit that I’ve been more on the side of the Grinch or Scrooge about the eclipse. I mean really— it’s two minutes of darkness. I get more than that every night. And as for the Zone of Totality***, seriously, my fellow Oregonians: in the grand scheme of things 99% is pretty darn close to 100%. You don’t need to trek to the coast or eastern Oregon to get the PERFECT viewing spot.

But perhaps I was mistaken.

The other night I saw this TED talk and my view has completely changed. It’s only twelve minutes. Do yourself a favor and watch it. Really. Go ahead. I’ll be waiting right here for you when you get back.

After watching that talk, for the first time I thought, “Maybe it would be worth getting to that absolute 100% Zone of Totality to see the eclipse.”

And then I saw the local news with all of the arm-waving and ZOMG EVERYONE IS COMING AND IT WILL BE A DISASTER.****

Guess I will have to settle for watching a 99% solar eclipse from the comfort of my back yard. With snacks, drinks, and a greater appreciation of our place in the universe.

**Okay, maybe they aren’t saying that last one, but you know it’s implied.

****There is already a 15 mile traffic backup in eastern Oregon. Granted, it’s for an electronic music festival being held out there through the weekend (“The Global Event of a Lifetime” per youredm.com), but still.