I’m not dead – I just went to Japan 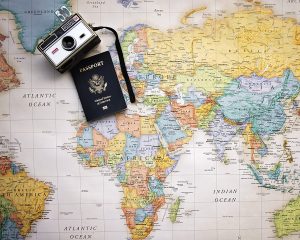 So you know how your life is just humming along, everything is cruising smoothly with not a care in the world, and then all of a sudden you go into overdrive?

Yeah, that was mid-September through, oh, about now.

The thing is, I kind of forgot I had a trip to Japan planned. I know you’re saying, “How could you forget you were going to Japan?”

Honestly I have no freaking idea how I forgot. The best I can figure is that I had the airplane tickets and then my brain said, “Tickets!” and promptly went back to the usual state of things. 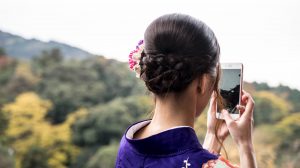 Saw a lot of this while in Japan. Except with the phone on a selfie stick.

Usually I would have been planning from the get-go: itinerary, lodgings, transportation, Buddhist temples, bookstores. This time there was pretty much none of that.

Oh, yeah, I remember now. It was mid-summer when I got the airplane tickets. You know, mid-summer. In Oregon. The one season where the sun will shine and it is absolutely delightful to hang out outside.*

So at T-minus seven days to departure, regular life got pushed aside and the focus turned to JAPAN.

My apologies for the delay in getting back to the blog. It would seem that not only did a monster head cold (which I picked up on the trip – what an awesome souvenir!) lay me low, but did you know that jet lag actually gets worse the older you get? Or maybe it’s just me. It took a few days for me to acclimate to the 16 hour time difference this direction. And I still have the lingering cold, but I had a great time catching up with friends, exploring areas of Japan I had never been to (Ninja Temple! JAXA!), and getting my Japanese language skills back.

That said, it’s good to be home. Just in time for Nanowrimo!** 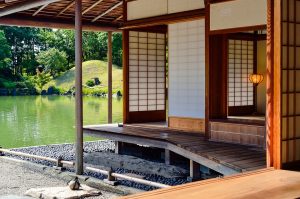 I am totally going to build myself one of these in the backyard. But probably without the moat.

*Unless there are forest fires that are blanketing the air with smoke, and you have to remain indoors because, seriously, the smoke is so bad. And do not get me started on the idjut who set off the Eagle Creek fire – WHICH IS STILL BURNING! Capital punishment would still be too light for that twerp.

**Actually, I think this year will be NaShoStoWriMo, as I will attempt to write 30 short stories in 30 days. Because a 50,000 word novel was just too easy.***